The true foray into road racing was to start with a practice session. Cade, proprietor of Wrenchaholics, and I ventured out to Waterford Hills for one of their Friday practice sessions.

Waterford has a nice system where you can get up to 4 sessions. They alternate between closed wheel and open wheel. We spent almost as much time checking the forecast as we did looking over the car, sadly.

The weather looked like it would clear, and instead it rained. And then it rained. We sat, waiting. 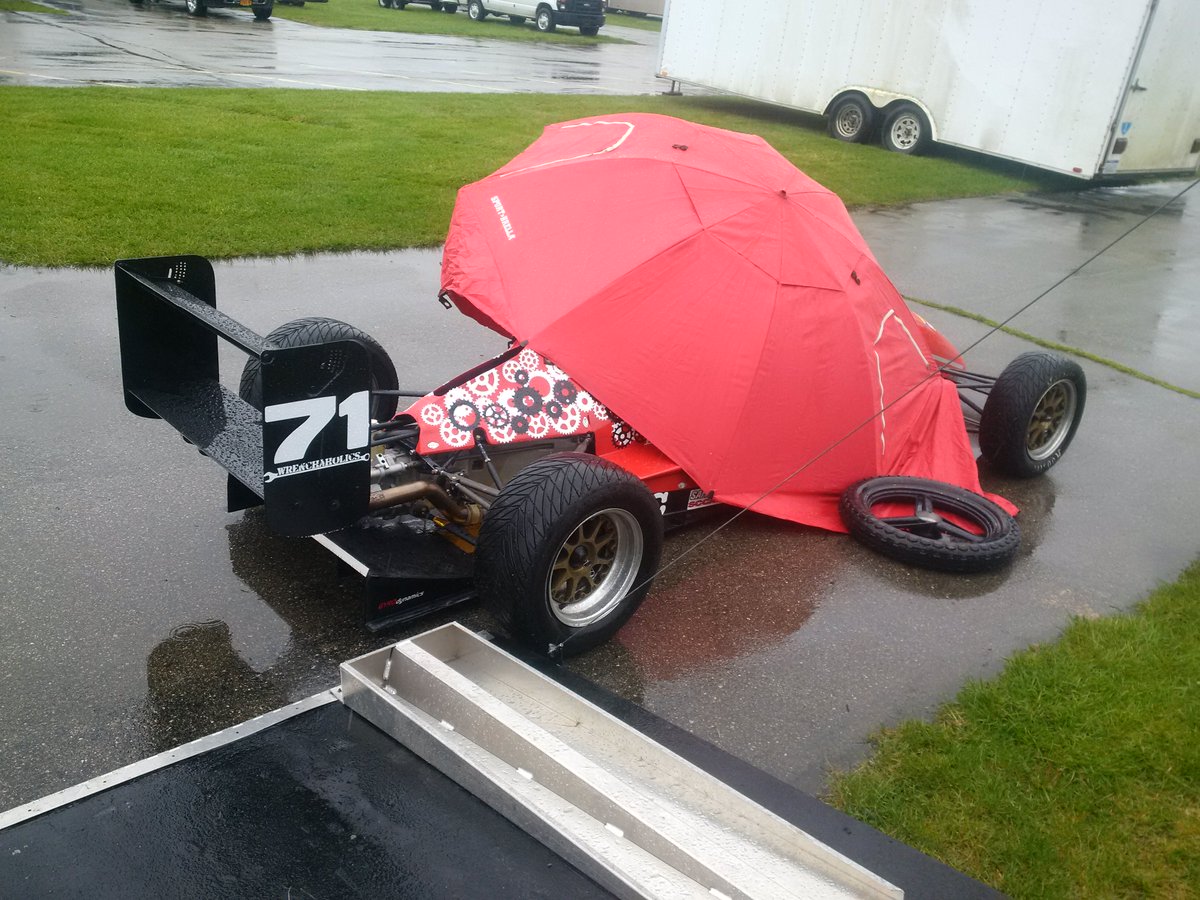 It got near the 4th session, and since this was the only track time before our first race, and it wasn’t pouring, we decided I should go back out. Ran some consistent lines, and was getting more comfortable when I made a discovery. I was not getting the car into 1st and 2nd gear – only 3rd and 4th. This newfound bump in power was absolutely NOT what I needed to match my newfound confidence. It did not take me long to goose it, and spin into the grass. The saturated ground proceeded to cause the car to dig in and rip a portion of the diffuser off.

There was no significant damage other than requiring a thorough clean and a trip to the diffuser repairman. Annoyingly we got soaked trying to get it off in a hurry so that it could be ferried to the vendor.

Oh well, it is something we can laugh about now.

I admit, it is a melancholy night in the Occhipinti household.

I should be packing for our trip to Bristol, but regretfully we are note headed there.

We were using a leased engine for the trip, and during its dyno preparation some internal damage was discovered. It was admittedly repairable, however it would have created much strife. We would have had no prove-out, missed the test session, and would have had to install the engine on the way to Bristol.

For a more local race, with less expenses, I suspect we would have proceeded. There were just too many variables, too high a speed to be messing around.

We desperately wanted to go and were planning our season around this race. We will be thinking of the teams that are there, the officials, and the fans.

Thank you to NSTA, and Bristol, for allowing us to go. I hope that we put on a good show and can go back next year.

Until next update, where I will be turning right,

I alluded in the previous entry that 2017 would be different. The tour has become the NSTA tour, and it has become unified geographically. It has expanded to cover a whole lot more geography (more than triple, as a matter of fact).

That was the final arbiter in a team decision. After 4 years of points racing, and the pressures associated with it, the team is going to pick and choose a schedule.

One such decision was an easy one. For the first time in many years, certainly more than the existence of our team, our style Modifieds are venturing to the Colosseum known as Bristol. This is an opportunity that neither team owner nor driver wanted to miss (not to mention crew members).

80 cars are expected to try and make the show. Apparently many others had the same feeling and want to turn laps at a place that NASCAR cars head to twice per year. The entry list was released today, with 88 to eventually be pared down to 80. http://speed51.com/short-track-u-s-nationals-central-entry-lists/#TopSpeedModified

That is the primary focus. Beyond that we will look at minimum to run the Tour races at Toledo and Kalamazoo. It would not be surprising to find us at some season ending big races at local tracks either. This reduction in schedule will allow for a proper regroup for future efforts.

But, I am not content with one historic venue. I will be embarking on a separate quest, also in an open wheel car. I am working with Wrenchaholics Racing and their fleet of Formula Continental race cars. https://www.wrenchaholics.com/171-team/ . Yes, I will be running a small schedule in said open wheel ride, being confused every time I turn right (okay not really – but it has been a long time), with the hope of ending up at Indianapolis. The SCCA Runoffs will be contested there. And if I can make it through 5 or so races unscathed, I should receive an invitation to rumble across the yard of bricks in September of this year.

So, it’s different, but all of it is exciting. Continue to stay tuned for announcements and more concrete schedules being announced. For now, plan on looking for our name in the results the weekend of May 20th in Tennessee.

2016 was a memorable season for our race team. It signaled the end of a quest.

In 2013 we started our Modified expedition, grabbed a win, good finish in points, and Rookie of Year at a local track.

In 2014 we chased the local track again, winning a race, winning points, and faring well against Touring competition.

In 2015 we started touring, managing a top 10 in points and visiting a whole lot of tracks we never saw before.

In 2016 we toured again – and we ended up trekking to Fort Wayne, Indiana in a snowstorm to collect our laurels as the Top Speed Modified Tour northern champions.

The best part is that for much of that journey we had the same supporters on board to take it with us. Murawski’s Tax Service, Techman Sales Inc., Engine Machine Service, and RAM Engineering Midwest. We would not have had the opportunity to keep chasing larger goals if it were not for them.

We are indebted to each of them. Thanks to you, and to the families that we ignored chasing it.

2017 will look different – but with some new wrinkles. 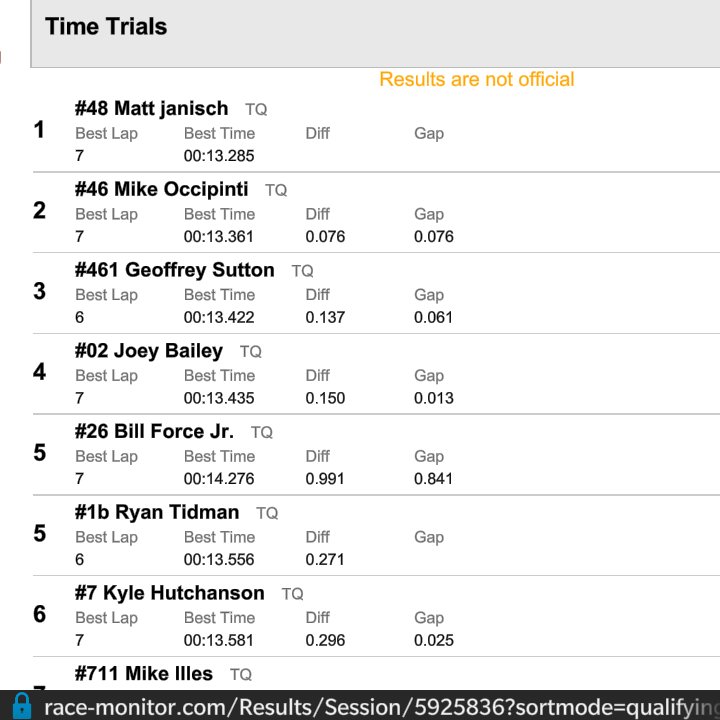 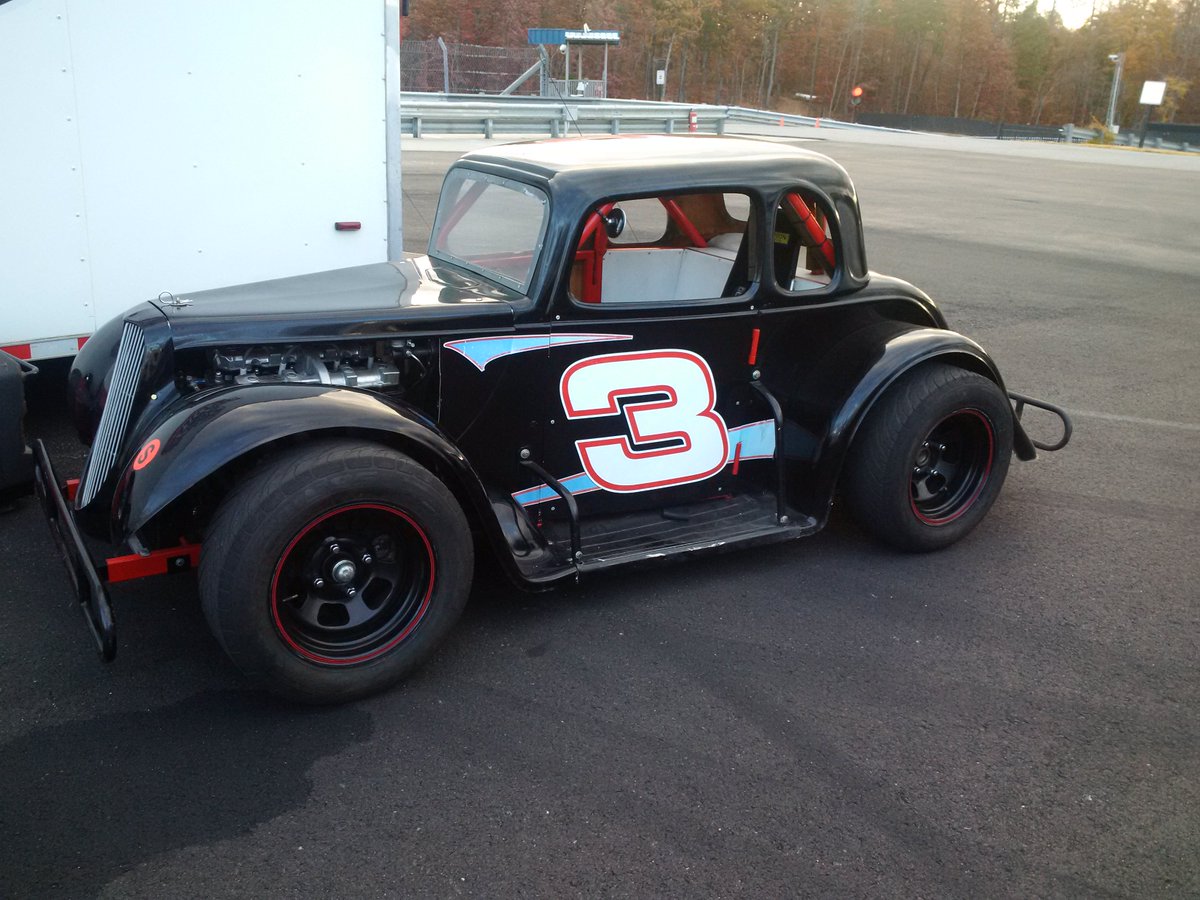